A holiday laser show to light up the town? 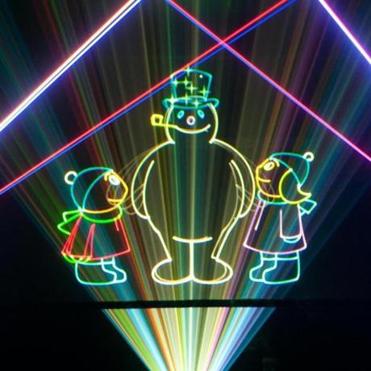 Downtown Fredericksburg could have some extra sparkle this holiday season.

Fredericksburg VA Main Street is seeking the city’s permission to project laser lights into the trees, on the sides of some buildings and along the sidewalks to create a festive atmosphere.

Main Street came up with the laser lights idea because outlets on the aging colonial-style street lamps lining William and Caroline streets can no longer effectively power strings of electric lights, and there is no money in the city’s budget to repair them for the next three to five years, Mike Carmody, who heads the nonprofit’s holiday lights task force, told City Council during its work session Tuesday. Downtown also doesn’t have as many large trees along the streets as it used to, and the new ones aren’t strong or large enough to handle lights.

Last year there was no unified plan for lighting downtown, except for the battery-operated lights that illuminated the holly trees in the large planters along the streets. This led to numerous complaints from people about the lack of holiday lights, according to Main Street. The laser projection shows would be a temporary solution until the street lamps can be rewired or replaced.

“It’s a good way to bridge this period, and can still provide merchants with a little bit of bang for the holiday season,” Carmody said.

Carmody’s committee has identified 33 locations for the light shows in the 500 to 1000 blocks of Caroline Street and 100 to 400 blocks of William Street. The projectors would either be located on roof lines, overhangs or inside windows and project twinkling lights into the branches of large pear trees, images such as snowflakes on the sides of such buildings as Café New Orleans and patterns of colorful lights onto the sidewalks.

Carmody said that the lights would be aimed so that they don’t distract or blind people driving down the streets, and that they’d have timers so they’d all come on at dark and shut off around 11 p.m. The timers would also eliminate the cost of manual labor to turn the lights on and off. His committee has recommended a $35 reimbursement each for the people and businesses providing electricity for the laser projectors.

Main Street is considering using colored laser lights because the cost of laser projectors that use only white lights is about eight times higher, Carmody said.

“My initial reaction is that I don’t like it,” said City Councilman Tim Duffy after watching a demonstration of the lights in council chambers. He said that the projector that created rapidly moving patterns of light would be bothersome to people like his wife, who has vertigo.

Councilwoman Kerry Devine said that she had concerns about using different colored lights, and prefers the look of the traditional white ones.

Ann Glave, Fredericksburg VA Main Street’s executive director, said that the lights didn’t show well in the room, and offered to give a demonstration outdoors.

Councilman Billy Withers asked if it would be possible to repair some of the lampposts so that electric lights could be used. Glave said it was her understanding that the sidewalks would have to be torn up to redo the wiring, and some of the lampposts would need to be replaced because they’ve rusted at the bottom. Carmody was asked to look into the price of white light projectors.

The projected budget for the laser light shows is $8,502, which includes $4,583 for the projectors, $2,000 for installation and $1,155 for location costs. Main Street has $4,000 budgeted for the downtown lighting project, and is seeking funding from Fredericksburg’s Economic Development Authority to cover the cost of the projectors. It also needs approval to install and show the lights on the city’s rights of way.

Want to join the discussion?
Feel free to contribute!

Make Your Own Bacon Candle!